As it stands more and more progressive thinking has come to the whole cannabis issue countrywide as a Gallup poll now suggest that two-thirds of Americans are on board with federal decriminalization of marijuana. But wait there is more! Republicans in Texas are in favor of decriminalizing marijuana and now Democrats are also jumping on board making this a bipartisan push. This generally bodes well for cannabis to become legal in the near future.

This video gives you a bit of insight on Rep. Joe Moody and his view on opioids criminalization. We believe its a good video to help you understand the mindset of the man behind the marijuana decriminalization bill in Texas.

So while we are still not talking about complete legalization in Texas at this point we are talking about a fine instead of jail time or a criminal history with the pains that go along with it being a thing of the past when it comes to pot possession if Rep. Joe Moody has his way in 2019.

Moody has filed a bill for the 2019 legislative session to decriminalize cannabis possession and merely make it a civil offense with a fine tied to it.

With support from Democrats as well as Republican, this bill has a good chance of making it into a law and finally putting a stop to the demonizing of marijuana in Texas.

Progressive counties in Texas like Harris County in Houston, TX has already adopted a decriminalization stance some time ago. Now since this policy has been instituted most of the police departments have complied with Harris County DA Oggs decision to simply write a ticket which would offer the offender the opportunity to go take a better decision-making class at the cost of $150. Once the class is completed the charges are dismissed.

12 Police Departments out of the 61 in Harris County are ignoring what is called the misdemeanor marijuana diversion program instituted by Ogg. This is where the push for decriminalization will come in to play where this becomes law across the board in Texas and can not be ignored. 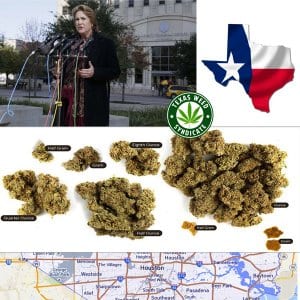 If you are caught with a small amount of marijuana or perephenelia you are issued a ticket which then makes you eligible to take a better decision-making class within 90 days at the cost of $150 after successful completion you can present to the court and your charges are dismissed. So there is no processing or going to jail.

Why did I mention all the above? Well, it shows that there is a move in Texas for decriminalization even within certain DA’s offices to stop wasting funds on things like busting pot heads and instead focusing law enforcement efforts and funds in other areas that are truly dangerous to the general public.

Now that the incumbent Pete Sessions who chaired the house rules committee has been replaced there is an even better chance at this decriminalization bill will pass since he has strongly opposed all decriminalization legislation in the past and has now been rejected by voters combined with the fact that governor Gregg Abbot has taken a favorable stance on reforming marijuana possession penalties there is hope that Texans will see decriminalization soon and hopefully one day full legalization of marijuana in the state!

Opiod Addiction Becomes A Reason To Get Medical MMJ In NJ