So the Trumpster is looking like he will support legislation that will start us down the road of federal legalization & decriminalization of marijuana on a federal level.

I am sure the zealot Jeff Sessions is not likely to be happy about this news since he has openly said he would go after marijuana businesses even in states that have legalized it as well as businesses that have complied with licensing to be a legal entity that sells marijuana in those states.

So how did all this talk of support for decriminalizing marijuana at the federal level get started? 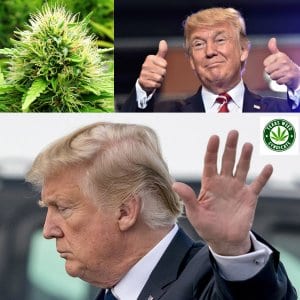 There are currently some bipartisan pieces of legislation that are being looked at that are sponsored by Sen. Cory Gardner (R-Colo.) and Sen. Elizabeth Warren (D-Mass.). The proposed marijuana legalization legislation would change the landscape of marijuana.

Currently, marijuana businesses are one of the most heavily taxed businesses in states the yare legal in but they are not afforded many of the other amenities that other businesses are. For example, banks and financial institutions that are federally insured will not touch a cannabis business because federally these entities are illegal and these institutions do not want to get caught up in a situation where they are handling what would be considered drug money.

This new proposed marijuana legislation would change all that and make the marijuana industry a stable one. This would not only mean good things for the industry but also investment opportunities for investors looking to invest in the industry that have as of yet been hesitant to do so.

Changes to the classification of marijuana

With this proposed legislation cannabis would be decriminalized and no longer be classified as a Class I drug. This change would be a huge step in changing the attitude towards cannabis at a federal level.

Marijuana legalization at the state level

Much of this move is to allow states rights to prevail when it comes to the issue of legalization of marijuana. With so many states legalizing marijuana at least on the medicinal level and some going all the way to complete legalization for adults of legal age.

Also no longer would there be restrictions with mailing this drug even within a state that it is legal in. Crazy anti-marijuana zealots like Sessions at the federal level would also be defanged by this move. Since cannabis would not be decriminalized at the federal level and a push to prosecute legal entities that sell it would no longer be viable.

President Trump is getting pushback from a coalition of narcotics officer groups for his support. They view it as an endorsement of some sort of more drug use in America. There is plenty of evidence to support the contrary and that this plant has been persecuted long enough. We commend our President on seeing thru the layer of bureaucracy that has made marijuana illegal for what it truly is.

As all things, we shall see if Trump’s support for legalizing marijuana legislation will remain steadfast or waiver as the legislation continues. More and more politicians are currently representing states that have some form of legalization of cannabis so were hopeful that in the very near future we will have sane marijuana laws that make sense and not demonize it.

The World Health Organization Gets It Will The USA?

Flying The Friendly Skies With Cannabis!