There are so may misconceptions about marijuana, so we did some digging around and 26 marijuana facts that we thought were interesting enough to share! As marijuana legalization persists more and more states have legal establishments to buy marijuana at legally which is also why Texas Weed Syndicate was originally born! To be a legal dispensary finder and help you in your search for finding legal bud in your area.

OK let’s get into some of the interesting facts we found about cannabis scouring the web! 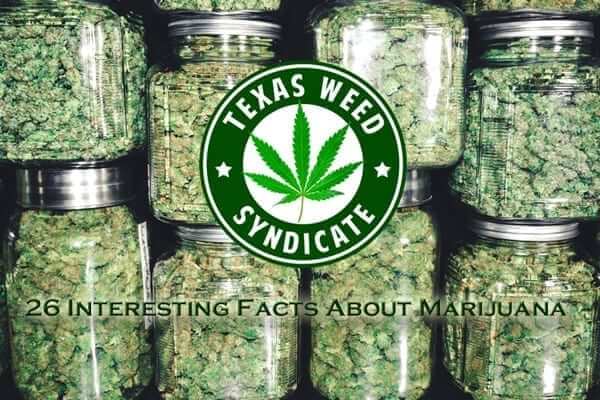 1. Legalizing Marijuana Did Not Increase Usage Among Teens

We found this fact to be interesting mainly because that has always been a talking point for not legalizing cannabis. The anti-legalization side of things has always said that legalization would lead to more use among underage users. It’s good to see they were wrong!

According to Factretriever.com 750K people are arrested for marijuana offenses but not all these arrests lead to prison time. According to this source less than 1 percent of current people in prison are in for a marijuana offense only It is usually when someone is caught doing something that the marijuana charge gets tacked on to what else they are already being charged with. This seems like an awful low number to us but it does make sense that most people likely get probation or some other form of punishment instead of prison time but that if your caught dealing and you’re in a non-legal cannabis state that this alone would land you in prison where people with small personal amounts would likely end up with probation.

3. Marijuana Can Slow & Kill Some Types Of Cancer

According to some scientist and ongoing studies on cannabis and its properties like THC and other cannabinoids like CBD have shown to kill or slow down certain types of cancer.

Recent studies that are being done are showing that THC and other type of CBD are able to slow down the growth as well as even kill some type of cancer. Currently these studies are being conducted in lab dishes as well as on animals.

There are also some clinical trials according to the American Cancer Society being conducted on humans and more are planned to understand this plant and its uses in cancer treatment better. While so far these studies have shown that cannabinoids are safe in treating cancer they have not yet shown to cure or help to control the disease.

As legalization continues and the federal government moves to legalize marijuana federally and let the states control it and get out of the cannabis ban business we should see more and more studies being done on the benefits of THC and all the cannabinoids in the CBD family!

Hemp was grown in the USA legally up until the Marihuana Tax Act of 1937. Many farmers grew hemp for industrial purposes. Hemp was used in many applications that we use plastics in today as well as being a great source to fabricate clothing from. Hemp has many uses and was fully utilized up until 1937 at which time an end was put to hemp growing up until the Hemp Farming Act of 2018 which defined hemp as cannabis with less than .3% THC. This separated it from other types of cannabis that are still a Class I controlled substance from a federal law perspective.

Barrack Obama was part of the “Choom Gang” which was a group of boys that played basketball and smoked weed. He never denied this or tried the Bill Clinton “I did not inhale” defense.

According to some of his peers he was not only a pot smoke but an innovator of pot smoking as well. He came up with a few smoking rules and rituals. Here are a few.

6. Since 2015 Marijuana Is The Fastest Growing Industry In The USA

Since 2015 the growth in the cannabis sector has been outpacing everything else. Its money-making potential has attracted many big players to look at the industry and get ready to enter it when Marijuana is fully legalizes in the USA.

Just a few we know about:

So just looking at this speculation on the big boy’s part it shows that there is a lot of confidence that Marijuana will be federally legal in the coming years. When big companies like these are looking at the industry you now something is up.

7. According To The UN 158.8 Million People Smoke Cannabis

According to the United Nations 158.8 million people around the world smoke pot which amounts to 3.8 percent of the world population. As tolerance for cannabis consumption become more tolerant, we would expect these number to rise!

European attitude towards marijuana seems to be much like their attitude towards alcohol. They do not much care what you do if you do it responsibly. Walking thru Vienna in 2019 you can occasionally get a whiff of weed being smoked right out in the streets but even more so as you walk thru the inner court yards of some of the apartment buildings that still have them. Laws are generally lax in Austria on cannabis while it is illegal enforcement for anything but dealing is minimal.

8. What is Bhang? Is It Made From Cannabis?

Bhang is an Indian yogurt drink that is made from yogurt, milk, nuts and spices and cannabis that is mixed with water. It is also known as Bhang Lassi and is used in Ayurvedic medicine to treat various ailments some of which include, nausea, vomiting and physical pain. Bhang is also used in religious ritual and practices in India. Bhang is primarily associated with the worship of lord Siva and is the official drink of Holi festivals. It is believed that Bhang was drank by Lord Siva to focus inward and harness divine powers.

9. The Name Marijuana Comes From Mexico

The name marijuana comes from a slang term used in Mexico that is believed to be a combination of Mary and Jane as it is pronounced in Spanish. Interestingly enough the two names were also common slang among the Mexican military for a brother or a prostitute back in the 1800’s

10. Men Are Twice As Likely To Use Marijuana In the USA

Men age 18 to 25 are about a third more likely to use marijuana at least once a month compared to women, and men age 26 and older are twice as likely as women in that age group, according to the 2016 SAMSA survey.

Several studies seem to indicate that alcohol has been shown to be more harmful then marijuana. Cannabis is also much less harmful then cocaine or heroin.

12. What is THC & Does It Have Mind Altering Effects?

THC 9 & THC 8 are the cannabinoids in the cannabis plant that are responsible for the psycho active mind-altering effects that marijuana can create. The higher the THC content in the plant the more of a high you will feel which is why cbd products are only allowed a maximum of .3% THC in the USA.

The cannabis plant contains around 110+ cannabinoids that have been identified.

The most prominent cannabinoids are:

13. The Chinese Were The First To Use Medical Marijuana

The first documented use of marijuana as a medicinal drug occurred in 2737 B.C. by the Chinese emperor Sheng Nung. The effectiveness of this herbal medicine for the emperor’s pains from rheumatism were documented. The Chinese surgeon Hua Tuo 140-208 was the first to use cannabis as an anesthetic.

During the temperance movement of the 1890’s cannabis was often recommended to people instead of alcohol. The Temperance movement was geared towards abolishing and outlawing the use of alcohol. It was believed that alcohol consumption was immoral and lead to immoral acts and conservative Americans thought that this would cause America to lose the blessings of God.

The Rastafari religion calls cannabis Ganja and it is considered a religious sacrament. It is considered wisdom weed and is used to gain deeper insight into one’s self and become more in tune with your inner spirituality. Ganja from a Rastafarian standpoint is also cited in the bible Psalms 104:14 that says, “He causeth the grass to grow for the cattle and herb for the service of man, that he may bring forth food out of the earth.”

In the 1850’s cannabis was considered a viable medicine and was listed in the Pharmacopoeia of 1851 for a variety of ailments. Some of which it was especially recommended for were neuralgia, gout, rheumatism, tetanus, hydrophobia, epidemic cholera, convulsions, chorea, hysteria, mental depression, delirium tremens, insanity, and uterine hemorrhage.

It’s always interesting to see how something that was once a commonly used medicine becomes a banned narcotic. Just like opium and cocaine once had medical uses.

17. In 1996 California Legalized Medical Marijuana Use

Proposition 215 in 1996 was the first piece of passed legislation to legalize medical marijuana use in the state of California. It allowed patients with valid medical cards to cultivate marijuana for personal medical use.

18. What's The Difference Between Hemp & Pot?

19. The Rest Of Some of the most interesting Facts About Marijuana

These are mmj facts that need very little explanation on our part!

We hope you enjoyed these facts and you learned something about cannabis in the process!

Where To Buy Marijuana In California

Welcome to Our Blog On Everything Marijuana Related!

Thanks For Joining Us!